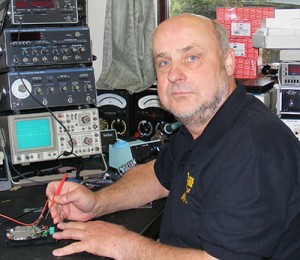 Hi, my name is Stephen Cordner also known as “Balders” and I live in Aylsham together with my good lady Heather. Although born in Harpenden, Hertfordshire I have lived here in Norfolk for all but the first six months of my life. Moving many times during my early years living all around the county before finally ending up here in Aylsham and I can now state categorically that “Here I Stay!!”

I went to Primary school in both Banham and then Cromer, passing my eleven plus and graduating to the Paston School in North Walsham. However after a short time my parents took on the lease of a public house in Hindolveston called “The Maids Head”. It was here aged 13 to 15 years that I developed a taste for real beer!! Straight from the barrel, this also meant a change of schools to Fakenham Grammar (a good move as I hated Paston!!).

I was about 10 years old when I first started to develop an interest in radio and electronics having received a Triang Radio Kit for Christmas. This kit consisted of plug in plastic units containing the various components. With an aerial wire thrown from my third floor bedroom I used to listen in to the fishing boats and found that I could even receive Humber Radio.

When I left school, I went straight into a job in a small radio and TV shop, however they wouldn’t send me to Technical College so I left to join another larger firm in Cromer and Holt (no longer there) called G. A. Hubbard’s. Although they wouldn’t send me to Tech, they did allow me to have my days off on Tech days also I doubled my wages and I was given a new Ford Escort van as I was now a field service engineer. Having acquired several of the City and Guilds at Norwich City College and armed with my new “Colour TV” certificate I obtained a job with a much larger company called Telefusion. They were based in Norwich, doubling my wages yet again and moving up to an “Estate Car” I was in heaven I really thought I had arrived.

It was after a couple of years running the service department at their Fakenham branch that I made the decision to set up my own service department here in Aylsham. Initially it was alongside a partner and we started off doing trade repairs for other Companies in Norfolk. Our business was called “Cortons Electrical” which had a large workshop in Red Lion Yard that we gradually kitted out for Radio, TV, Hi-Fi and domestic repairs. I carried on studying for all the electronic City and Guild courses that Norwich City College ran and became part of the furniture at the college and was eventually offered a part time teaching job which I held for ten years. Mainly writing and delivering courses on TV Servicing, Video Recording and Servicing, Compact Disc Technology, Satellite TV and various practical fault finding courses. After buying my partner out when he retired we moved our shop into much larger premises on the High Street, where we also built Computers and ran a one hour mini lab. After a total of thirty years trading I sold up and now I’m semi-retired enjoying my other hobbies of Hot Air Ballooning, woodwork and of course drinking real ale!

I first met up with the Bittern DX Group members at a local event in 2011 that I was attending and they triggered my interest in amateur radio. After attending a few meetings I then set about getting a licence for myself and managed to move from Foundation through to the Advanced in just over 3 months. My main interests are of course based on the electronic side of the hobby, both construction and repair but I really enjoy the many aspects of the hobby especially the social side. I have been involved with Norfolk Amateur Radio Club as a tutor on their courses, but always happy to help individuals within BDXG if required?

At the June 2013 AGM I was honoured to become Chairman especially being relatively new to the hobby of amateur radio itself. But I am sure if you would like to come along and join us, you will find the hobby and our group as much fun as I do??