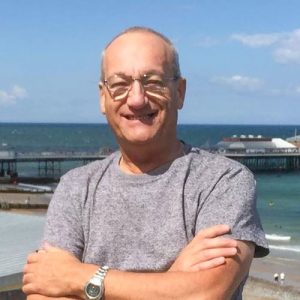 As long as he can remember Julian has been interested in Amateur Radio and was an SWL at age of 11. But his inability to master morse prevented him from pursuing this hobby at the time. (Morse being a licensing requirement then unlike today.)

He joined GPO Telephones as an apprentice way back in the late ’60’s and since that time has had a career that has covered many aspects of technology over the years.

A period in R&D on the wideband distribution system developed by the (then) Post Office Corporation for Milton Keynes gave him a good grounding in RF systems and measurement.

That was followed by a period in TV servicing (money and a car being the attraction!) that was followed (in ’77) by field servicing of early micro computer systems. After a few years working on a high power radar system he returned to the TV business when he and Club Chairman M0HET used to battle for the honours in national service competitions!

Julian has a strong interest in computers and software and was responsible for coding a number of games for the fledgling gaming industry of the early 1980’s. That same interest continues to today in particular with regard to SDR and space operations with cubesats and NOAA weather observation systems.

Julian joined the Bittern DXers in 2014 to get back to his teenage hobby and took all three licences in quick succession with the help of the M0HET at the Club and Bath Based Distance Learning Course for Advanced Students for his Advanced Licence.

Julian’s home is in Watton, mid-Norfolk and because of the distance, does not often attend meetings, but is frequently to be found experimenting and just playing in the shack!