On Sunday 22nd February, the Bittern Dx Group packed their kit and made the 40 mile journey to a community centre at Saham Toney (JO02JN) where they set up ‘camp’ to give around 75 Rainbows, Brownies, Guides and 25 to 30 leaders their first introduction to the various disciplines of our hobby and take part in other Guiding round the world activities..

The day was organised by Watton & District Girlguiding as part of the Girlguiding movement’s Thinking Day On The Air. The 22nd February is Thinking Day to mark the birthday of Lord Robert Baden-Powell, the founder of the Scout and Guide movements, and his wife Olave, who was the first World Chief Guide.

TDOTA provides an opportunity for the members of Girlguiding to talk to other members via Amateur Radio and at Saham some QSOs were made, with many of the young people getting the chance to speak to other units and also to members of the Amateur Radio community. They also tried their hand at Morse Code and identifying electronic components in our quiz.

Popular with the young people was the Foxhunt which also attracted the attention of BBC Radio Norfolk’s Treasure Quest programme where the venue held the final ‘treasure’ of that day’s hunt.

On their arrival, presenter Kirsteen Thorne had to locate the Fox with help of club members, the Fox sitting on the day’s “Treasure”

Deteriorating weather meant we had to close down earlier than anticipated but everyone present judged the day a great success and as well as introducing young people to the hobby also got listeners to BBC Radio Norfolk trying to work out why Foxhunting can also be an acceptable sport! 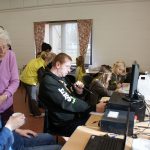 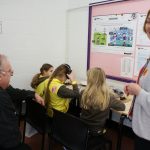 Finding out all about Morse from Thomas – 2E0TKZ 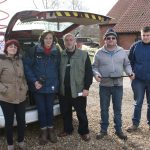 It do not seem like twelve months have passed  since SOS Radio Week 2014, but now SOS Radio Week 2015 is approaching fast. The Bittern DX Group will be active at Sheringham Lifeboat Station for two weekends 24th & 25th January and again 31st January & 1st February. Everything planned will be the same for both weekends, plus the raffle will be drawn at 12 o’clock midday on the 1st February. All BDXG members are welcome to attend and visitors will be made most welcome.

If you are going to attend one or both of the weekends, could you please let me know so badges can be printed, but there is nothing to stop you turning up on the day. We will meet at 0900 sharp at the boating lake on Sheringham Lees to erect antennas and if enough turn up start setting up the station in the Lfeboat Station.  There will be an SSB and a data station running. The sooner we get the stations up and running the quicker we can start operating and perhaps win a few certificates this year.

This is one of if not the best SES the BDXG run, we are always made  most welcome,  plus everything is in the warm and dry with tea and coffee on tap whenever you want it.

Please keep pushing the raffle tickets and sponsorship form. I notice not many members have asked for a second batch of tickets.

The two weekends were well attended and thanks to all who helped set-up and run the station.

The total raised by raffle tickets sales, sponsorship and donations was £500 to the RNLI

Sunday 1st March 2015. Four members of the Bittern DX Group (Harold G8VEN travelling all the way from Leicestershire, leaving home at 06:30) turned up at 10:00 at Sheringham Lifeboat stationto present a cheque for £500 to Sheringham RNLI. The cheque was the result of fund raising during SOS Radio Week 2015.
. 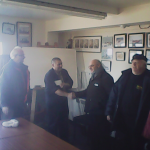 Weekend of 27/28 September, the Bittern DX group set up a special event station behind the museum at Holt heritage railway station.

The HF radio working on the Windom and VHF 2m radio on a collinear were set up in the caravan with data in the awning. Several group members attended and help set up and work the radios.  The weather stayed fine all weekend and both steam and diesel trains were running between Holt and Sheringham where NARc had set up a station using the call sign GB1NNR.

Bittern group set up a special event station M0NBG in a camping field near Beeston Regis church where a classic car rally was being held. A 12m vertical and a delta loop for HF and a 10m vertical for data were erected. The weather was fine and through out the day several visitors were shown the equipment and demonstrations of HF and data. Group members took turns in using the equipment

The Crazy Foxhunt which James M0UKS and Kevin M0UJD organised as their swansong was crazy for several reasons, not least that after finding Fox 1 James in Scottow they then found out they had to find Fox 2 Kevin several more miles away in Walcott.  But if teams managed to pick up one or more of 5 listed items on the way (piece of fruit, beermat, sweet, sunday paper, oak leaf) they could subtract a mile for each item brought! The winners were Paul G3VPT and Bob G7JTZ but it was all for fun and every one of the six teams seemed to enjoy it, including a nice meal at Kevin’s fox location of The Lighthouse Inn at Walcott – thanks to landlord Steve for letting us have the use of his green for the 40′ antenna and marquee for food and drink!

Bittern DX group ran an event station next to Blakeney church which has a mariners light for the International Lighthouse and Lightship weekend (ILLW) 2014.

This is a lantern turret on the 13th century church of St Nicolas. It is no longer in use but once guided sailors into the busy port of Blakeney. A light still glows after dark. 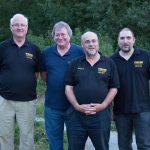 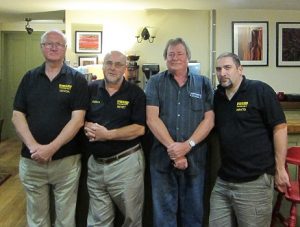 [excerpts from NARc site with thanks to David G7URP]

So the 2014 NARC Trophy Foxhunt took place on 30th July and yes, it was cunning!

The Surlingham Ferry pub is a lovely place and serves good food and cool beer – and thats what last years winners and this years Foxes Kevin M0UJD and James M0UKS were hoping everyone would think when they DF’d to that location on the map.

Trouble was, the foxes were opposite the pub but on the other side of the river and revelled in leaving a decoy car at the pub complete with aerial and a cheeky note saying “Sorry, we are not here”….

Take a look at the photos James and I have uploaded to the NARC gallery – please feel free to upload your own!

All great fun for the 10 teams I think they will agree and first there reaching the foxes in 15.3 miles was Nev M0NFY, but the winners are the team who gets there in the least miles travelled which was The Bittern DX Group (also NARC members) led by their Chairman Steve M0HET and who found the fox in just 9.1 miles, which was really good going. Closely followed by Mike and Bob in 10.2 miles and then Nev. (Many large slugs also found the Fox’s as the photos in our gallery show!

To all 10 teams and of course the intrepid fox’s very well done and thank you for taking part. With so many teams we are thinking of running an extra Foxhunt in August….. Interested? See James or Kevin as soon]